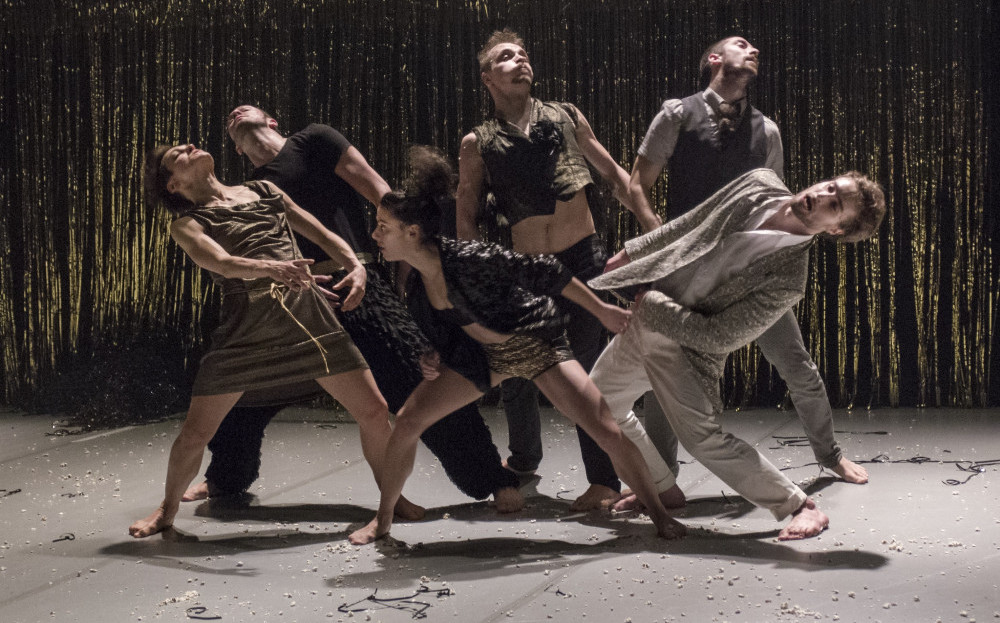 Actors: Fanny Barrouquére, Andrea Opavská, Patrik Čermák, Branislav Bašista, Michal Heriban, Ivo Sedláček Gossip, blather, slander, misinformation or rumours are a cross-cultural phenomenon of humanity. The power and punch sound of the word uttered in the form of slander is often more powerful than the gun. It spreads at great speed, it cannot be resisted, it can easily injure, discredit, turn a life around without any physical contact. Slander is faster than light and often upon us before it arises. We feed it and we deform, we need it and condemn.
75 min. Premiere: 24. 11. 2015

Rehearsed at: Studio Alta
With the support of: Ministry of Culture of the Czech Republic, City of Prague


“For the heroic performance of all the protagonists. For the excellently built-up andattractive performance. For the topicality and, at the same time, immortalityof the theme.  Simply – this is worth seeing it. Again and again.”
“Lenka Vagnerová seated the audience in La Fabrika before a dance mirror called Gossip and showed it in a breathtaking way how painful can gossiping be. Those who left unaffected, must have come with a cold heart.”
“Perfect harmony, perception, suppleness and nimbleness of all dancers, it all seemed almost incredible.”
(BARBORA ŠVARCOVÁ, Generace21,18.1. 2016)

"Vagnerová’s Gossip, is achangeable, lively and ipressive dance huddle, which can induce nausea as in a trip on a roller coaster. It is speculated how an outsider can become an aggressor, while still retaining lightness, wit and anunforced street zest. It combines dance, physica, puppet and dramatic theatre in a complex, almost total form, which with the minimum of scenographic aidscreates images so imaginative that we can have the feeling as if we were sitting in the cinema with 3-D glasses over our eyes – obviously with the advantage that we are witnessing the energy of live dancers. Everyone gives an outstanding performance: they are inscrutable and dangerous, they have to be always on their guard, because a potential attacker might ambush at any time."
(KAROLINA PLICKOVÁ, World and Theatre)

“The overwhelming concentration of thoughts and attitudes that the individual sections reveal is truly extraordinary.
" Nobody has doubted from the beginning that this will be one of the events of the season.”
“GOSSIP breaks the bones of our pictures in a society in which we more or lessvoluntarily abide, transforms them and confronts us with them - and the resultis our own hypocrisy. Synergy with the feelings and actions of the characters represented enhance the perception and actual viewing experience, modelled by acombination of music, light and scenes lacking deaf spots.”
(JAKUB NOVÁK,Taneční zóna, 2015)

“GOSSIP production will be among the events of the season.”
“Each output hides the original details and with the changeable dynamics of the whole show the audience remain vigilant at all times, dancing and actingevents will blend when they are least expected. Looking at some of the physical variations is a pure pleasure.”
“The multiplicity of themes and images overwhelms the viewer. Equally captivating are the performances in motion parts.”
(LUCIE KOCOURKOVÁ, Opera Plus, 26.11.2015)

“The show will undoubtedly be among the bestof this year’s season.”
“It is remarkable how she is working with thedancers in every new project. It doesn’t let the audience rest, it can pull and pull down both sides – the dancers and the spectators – especially in dynamic dance scenes.”
(MARCELA BENONIOVÁ, Taneční actuality, 29.11.2015)

"The Gossip November premiére in La Fabrika finally brought to this year’s season the much longed-for and anticipated work of quality dance, whichhas no protruding or rasping "but".
(Zuzana Smugalová, Blog o tanci, 14.2. 2016)

"Atruly brilliantly staged show. An expert handling of the central motif, which fluentlyand unambiguously is threaded through the entire performance. This is crafted by excellent choreography and accompanied by superbly chosen music. Also wonderful team work and brillant movements by practically all the actors. In my opinion it is the best performance yet of the L. Vágnerová studio, which again demonstrates its outstanding talent. Quite simply a true theatrical experience!:-)"
(JAN PARIZEK, I-divadlo, 12.2.2016)